This beam antenna has been in use by the VK3VT team for at least 40 years and has proved to be a winner on numerous occasions - nearly all foxhunters in Melbourne now use this antenna.

The original design came from an article by James Lawson W2PV (SK) in Ham Radio Magazine  May 1980 page 22 Fig 11,  where he indicates the best front to back ratio on a Yagi antenna could be obtained using 0.15 wavelength on a three element beam. The details of this beam were published some time ago in Amateur Radio magazine (October 1988). The article is extracted below:

While more gain could be realised from wider spaced elements this antenna has reasonable gain, good front to back ratio and a clean pattern. In fox hunting the cleaner the pattern the more confidence a hound has that the direction is correct. Several regular hunters in the Melbourne area have built beams optimised for 144.250MHz which have superior performance to this unit at that frequency, however their performance at other parts of the band falls off dramatically. This antenna has reasonably uniform performance across the whole two metre band and can be used on any two metre hunt.

We should be using metric measurements. The aluminium company does still make some imperial products and the smallest diameter aluminium tube available is 3/16 inch. It was used for this antenna, and one four metre length is required. Therefore, imperial measurements are used when referring to the elements and any holes that must be a snug fit for them. Elements are made from the 3/16 inch aluminium tube and the boom is 12.5 millimetres square section. Mounting the elements through the boom is achieved by drilling a 3/16 inch hole and forcing the tube through. Measure the amount of the element on each side of the boom and adjust until the boom is in the middle of the element. Holding the elements in place are self-tapping screws through the boom. There is no need to have these screws going through the elements as they are screwed through the boom and then press against the element holding it securely. Update - companies no longer carry the 3/16inch tube but I have found a source of 6.3mm tube - results are almost as good with that - I will update further shortly as I am building a new beam.

The beam is fed by a T-match as this provides a balanced feed which will not skew the radiation pattern as can happen with a gamma match. A half wave balun is used to connect the RG58 feed line. The length given is for good quality RG58 with a velocity factor of 0.66, be careful as some of the cheaper cable, branded as RG58, may not have this velocity factor.

As I would not be transmitting through this antenna I made no attempt to match it, all the text books would have small capacitors in each leg of the T’ and the length of the ‘T’ arms should be longer. However it seems to make little practical difference to the antenna. The length of the ‘T’ arms was determined by what was left of a 4 Metre length of tube once the elements had been cut. This gives 350mm each side.

The VSWR of my antenna is about 3:1 so do some more matching if you want to use it for transmitting. The clamps at the end of the ‘T arms are made from 10 millimetre aluminium angle. Indentations for the element and the ‘T’ tube are made with a round file and extend the full depth of one side of the angle. This positively locates the T’ arms. The other section of the clamp has one side of the angle removed completely. A machine screw holds these two sections together. The addition of a spring washer will help to prevent the whole lot from falling off in the middle of a hunt. (There is a modification that can be applied here - a number of builders have used a short section of the boom material for these clamps with holes for the element and the T and self tapping screws locking them in place.)

Mount the balun in a small plastic ‘jiffy’ box to provide protection from the weather and the ravages of the car boot. On one fox hunt we could not get a definite direction and finally tracked the problem down to broken connections on the a balun that had not been protected. The jiffy box is screwed to the boom with self tapping screws and provides support for the arms of the ‘T’, drill 3/16 inch holes in each side to accommodate these. Self-tapping screws and solder Iugs are used to connect the balun and feed-line to the ‘T’ arms. The feed-line is securely attached (tape or cable ties) to the boom and then routed through a suitable hole in the jiffy box. Leave some slack inside the box to allow for small movements in the elements due to wind and rough ground. Bunch all the braids from each end of the balun and the feed-line together and solder them, taking care not to overheat the dielectric in the cable and thus cause shorts. Seal the holes in the jiffy box and lock the cable in place with silicone sealant. NOTE: Use ‘ROOF and SPOUTING’ sealer, as ‘BATHROOM’ sealer contains acetic acid which will attack the copper and aluminium.

Attach enough feed-line to allow for the car door to open and still have some slack in the car. To watch your new home brew super fox hunt receiver fly out the door onto the footpath is not a good feeling. As we change bands often on a hunts these days, we have a cable from the receiver up to the roof and then just a short lead on the antenna (or a connector mounted directly on the antenna.)

Attaching the beam to the pole on the car is done with a ‘U, bolt through the boom. Make sure you put the antenna on pointing in right direction and that the handle, or other direction pointer, agrees with the beam. Many teams have fallen for this mistake and have rushed off in the wrong direction and that is the end of their hunt. Once again due to the requirement to change antennas in a hurry we are now using a clamp arrangement copied from Ewen VK3OW -  Will put this on the web soon.

Please note:  Paul VK3DIP has released a new version of his YAGICAD sortware and using this I have found that the length of the director should be changed from the earlier figure the length in the table below is correct.  The length shown in the drawing is incorrect. This change of 30mm significantly improved both the predicted and observed performance of the antenna. The plots below are from the new version of YAGICAD. [This can be downloaded from Paul's website yagicad.com]

Dimensions are as follows:

The spacing is measured from the reflector to the centre of the other element.

A "T" match is used with a BALUN to match the feed-line to the antenna. 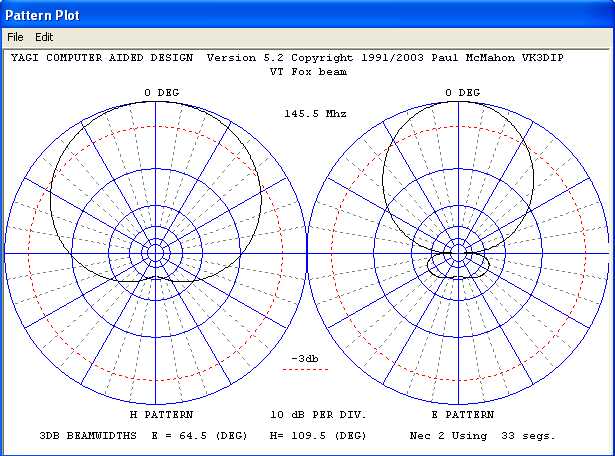 Responses of the antenna from the same program 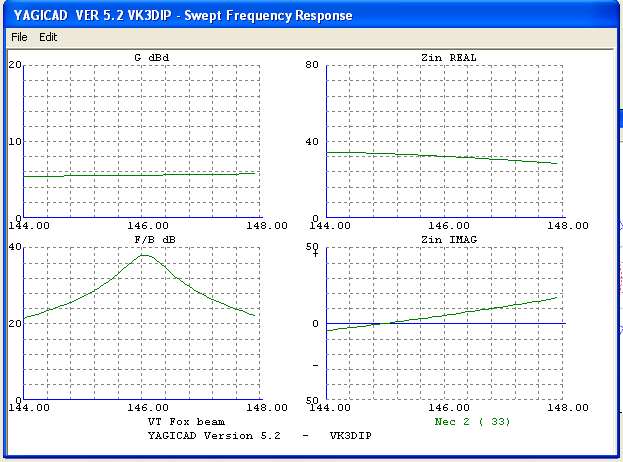